A Midwestern family pitted against the Apocalypse

Revising Season 2 of This Plague of Days this evening. Here’s a bitter taste of Sutr-X. This is just before the Infected invade America.

Jack stomped on the brake and swerved to avoid a body in a narrow gap between abandoned cars. It had been a woman. Three large black birds tore into the gore of her open belly.

Jack blasted the van’s horn. The birds backed away a few feet, but did not fly. In their retreat, the birds revealed more horror.

The dead woman lay on her back, swollen and decomposing. The corpse was too close to avoid being seen. What was seen could not be unseen.

One eye protruded, swollen in its socket. The other eye was missing, lost to the vultures. The tongue, too, was fat and stuck out at an angle from the yawning maw. Then Jack spotted something worse…

Episode 4 is out now. Get each of episodes for 99 cents each or grab all of Season One for a discount of just $3.99. 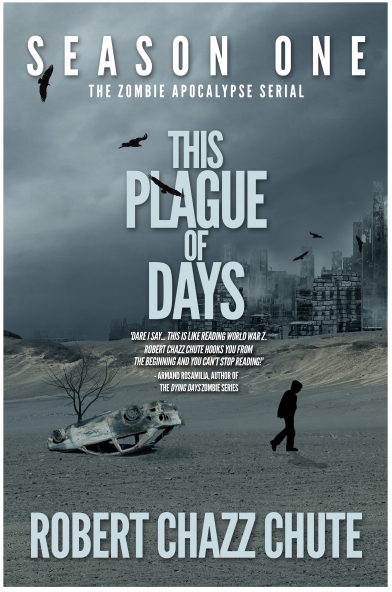 An autistic boy and his family versus The Running Dead

Ex Parte Press publishes suspenseful apocalyptic epics and killer crime thrillers. Check out your next binge read at AllThatChazz.com. END_OF_DOCUMENT_TOKEN_TO_BE_REPLACED
This entry was posted on Tuesday, July 9th, 2013 at 1:39 am and tagged with book, books, ebooks, fiction, horror, robert chazz chute, suspense, This Plague of Days, zombie, zombies and posted in the book, the serial, This Plague of Days. You can follow any responses to this entry through the RSS 2.0 feed.
« Why This Plague of Days is a serial (and click on for a secret)
This Plague of Days: Linkapalooza »

One response to “A Midwestern family pitted against the Apocalypse”